Home » Services » Before and After School Care » Judo 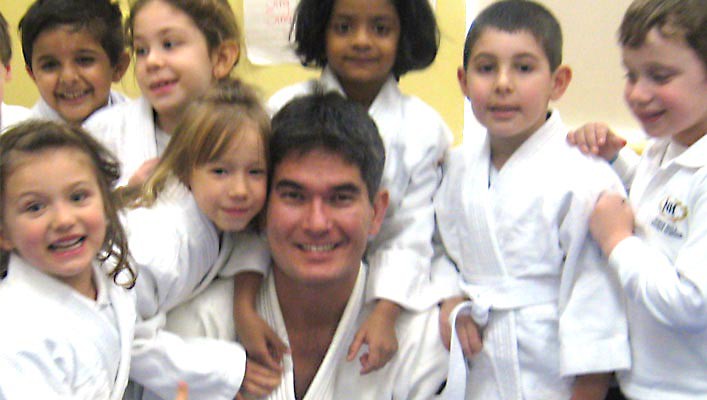 **Please note that Judo is offered as part of North Hill’s Physical Education program once a week for children, ages 4 and up.

The art of Judo began in 1882 in Tokyo, Japan. Its founder, Mr. Kano, wished to modernize the ancient martial art of jujitsu and create a sport for modern times. He removed all of the “hard” and dangerous techniques from jujitsu, and focused on developing a sport which would emphasize suppleness, flexibility, balance, co-ordination and speed, as well as self-discipline and intelligence in its practice. Judo literally translates as “the gentle way” has been described as a chess game played with the entire body, with its players trying to off-balance each other with throwing techniques and then pin each other with groundwork techniques. It quickly became one of the most popular martial arts in Japan at the turn of the last century and then continued to gain popularity world-wide as a sport, eventually entering the Olympics in 1946. It especially grew in popularity in Europe with countries such as England, France, Italy, Spain, Russia, the Netherlands, and Germany vying for top international honours with the top Asian players by the 1970’s. Today, Judo ranks second to soccer as the most practiced sport in France.

Each class in the North HIll Private School Judo Program will be roughly divided into three sections: a warm-up, a technical section (simple throws and holds) and a games section.

Students will be challenged with flexibility and co-ordination exercises in the warm-up. Strength will also improve with some of the exercises. All the exercises will introduce and re-enforce movements that the students will use later in the technical section of the class. The end of the warm-up will always include Judo’s unique “falling practice”. A great amount of emphasis will be placed upon these exercises for the all around safety of the student as they progress in their practice of Judo (useful as well in other sports such as soccer, gymnastics, football, and hockey).

The technical section will introduce a few basic throws over a long period of time, with very young students only throwing and being thrown by the instructor until they display the proper amount of physical control and proficiency in the falling practice.

The games played at the end of each class will also consolidate all the physical learning the student has acquired in the first two sections of the class in a fun and challenging atmosphere.

A brief breathing meditation will commence and end each class to calm and focus the student’s mind to the tasks at hand. As well, students will be encouraged to develop a strong sense of self-control towards the safe practice of Judo. One of Judo’s basic teachings is that the greatest amount of learning is achieved in an atmosphere of mutual co-operation and respect. Students in Judo always work in parts, and so they learn very quickly that by working together, they will learn faster.

Another basic teaching in Judo is that brute strength can be overcome with intelligent finesse, if the techniques are well understood and diligently practiced. The emphasis of Judo is not one of “might is right” but rather on “the path of least resistance” towards one’s goals.

Judo ultimately aims to teach the student how to be calm and reasonable, and yet still achieve the best results for themselves by working together as a group towards a common goal.

“Almost 7 years ago, we came to North Hill Private School with our daughter Gabby. Leaving your child in someone’s care for the first time is always a daunting proposition, and I remember that feeling of anxiety as I drove out of the parking lot on those first few days, North Hill was exceptional, in so many ways. Gabby’s first teacher, Miss Boccia, was so patient and caring and made that first year so enjoyable for Gabby.”